When we get sick the first thing we are told is to “eat more greens”. as it turns out chlorophyll, which is responsible for making plants green, also contains powerful healing properties.

When it comes to cannabis there’s a lot of noise about CBD’s and THC but one of the most powerful healing properties in cannabis seems to get overlooked – Chlorophyll.

Chlorophyll is responsible for the green colour in the leaves and because there is so much chlorophyll in cannabis, the plant is very, very green.

When it comes to cooking with cannabis, many people try to take the chlorophyll out because of aesthetics and flavour but I would argue that this is a mistake. Here’s why… 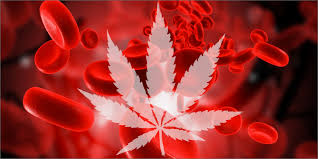 Chlorophyll is also rich in live-enzymes which help in the cleansing of the blood and which, again, enhances the ability of the blood to carry more oxygen.

Vitamins & Minerals: As it turns out, chlorophyll is an excellent source of vitamins such as vitamin A, C, E and K as well as beta carotene. It’s also a powerful antioxidant and provides you with vital minerals such as magnesium, iron, potassium, calcium and essential fatty acids.

Magnesium is also responsible for the green colour. The magnesium, which is the central molecule of chlorophyll, contains a special ring shaped formation which captures wavelengths of light. However, green is not captured and so the colour green is reflected back to our eye.

Magnesium is also known to provide a high alkalising effect on the body and delivers oxygen to body tissues and cells.

Oxygen is vital to our health and to our survival. I once went 40 days without eating any food and I was fine but find me a few minutes into a sever asthma attack and I’m turning blue and literally feeing the life ebb out of me. Oxygen is crucial for life and without it we die pretty quickly.

Every single cell in our bodies requires oxygen. Our cells are energized by oxygen in order for regeneration to happen. Oxygen is required for food motabilisation as well as the elimination of toxins and waste through the process of oxidation.

Our brain needs oxygen continually to process information and in order for our organs to function efficiently they need loads of oxygen. Basically everything that we take for granted: thinking, moving, eating, sleeping, feeling and talking, are all entirely dependant on oxygen for the energy to facilitate these processes.

In fact, oxygen is the only element that is capable of combining with just about every other element to basically build and maintain our bodies.

When your immune system is compromised by a lack of oxygen, you are more susceptible to bacterial, viral infections, colds and flu. Oxygen-deficient blood presents itself with a variety of metabolic disorders, most recognizable by excess uric acid which makes your body acidic rather than alkaline. Oxygen protects you against unfriendly bacteria and toxins and will help your body cleanse them from your system while keeping your body alkaline.

Oxygen has been used in a myriad of ways to heal. It is used to treat the sick and injured, it treats bone infections, wounds, carbon-monoxide poisoning, decompression sickness and now the sports field has opened its eyes to increasing oxygen levels to treat athletes.

Increased oxygen has been shown to heal cancers and reduce inflammation. When your body has enough oxygen you feel energised and motivated.

So, we know that chlorophyll helps the body to maximize it’s oxygen intake and we know that cannabis has loads and loads of chlorophyll – it’s one of the most abundant properties found in this amazing plant. So, when you make oil and it comes out so green that it looks black – this is good! This is not only THC and CBD’s but a rich source of powerful, healing, oxygen creating chlorophyll.

So next time you cook with cannabis and everything goes a light shade of green, don’t despair, rejoice because the green is an integral part of the healing experience. The more chlorophyll you eat, the more oxygen your body is able to convert into your blood and the healthier you become. With oxygen-rich blood you are able to fight off disease effectively and you are able to heal more quickly.

If you have access to the fresh plant, then eating it raw is always best . Any heat begins to destroy or change vital nutrients so juicing the leaves or eating them in a salad regularly will provide you with the most long term benefits.

Of course, the chlorophyll is not limited to the concentrate oil – if you are growing for yourself, then eat the leaves (yes really!). Eating green plants raw is always best so if you have access to the fresh plant – use it!

It seems to me that the more I look into the cannabis plant, the more amazing it becomes and when it comes down to it, it’s best to keep it green!